Skip to content
Top US Policymakers, AJC CEO Express Outrage Over Turkey’s Occupation of Cyprus and Other Violations in the Region

Top US Policymakers, AJC CEO Express Outrage Over Turkey’s Occupation of Cyprus and Other Violations in the Region

WASHINGTON, DC, July 20, 2020 – Many of the most influential US foreign policymakers in the US Congress, along with the American Jewish Committee CEO, made some of the strongest public statements against Turkey in recent years in an online commemoration of the dark anniversary of the Turkish invasion of Cyprus. This event, viewed live by over 600 around the world (and by hundreds more since), featured a briefing by the Minister of Foreign Affairs of the Republic of Cyprus Nikos Christodoulides. It was hosted by the International Coordinating Committee – Justice for Cyprus (PSEKA) and led by PSEKA President Philip Christopher and Andy Manatos.

A video of this entire event can be viewed here: https://youtu.be/vk39dmq7Qdo 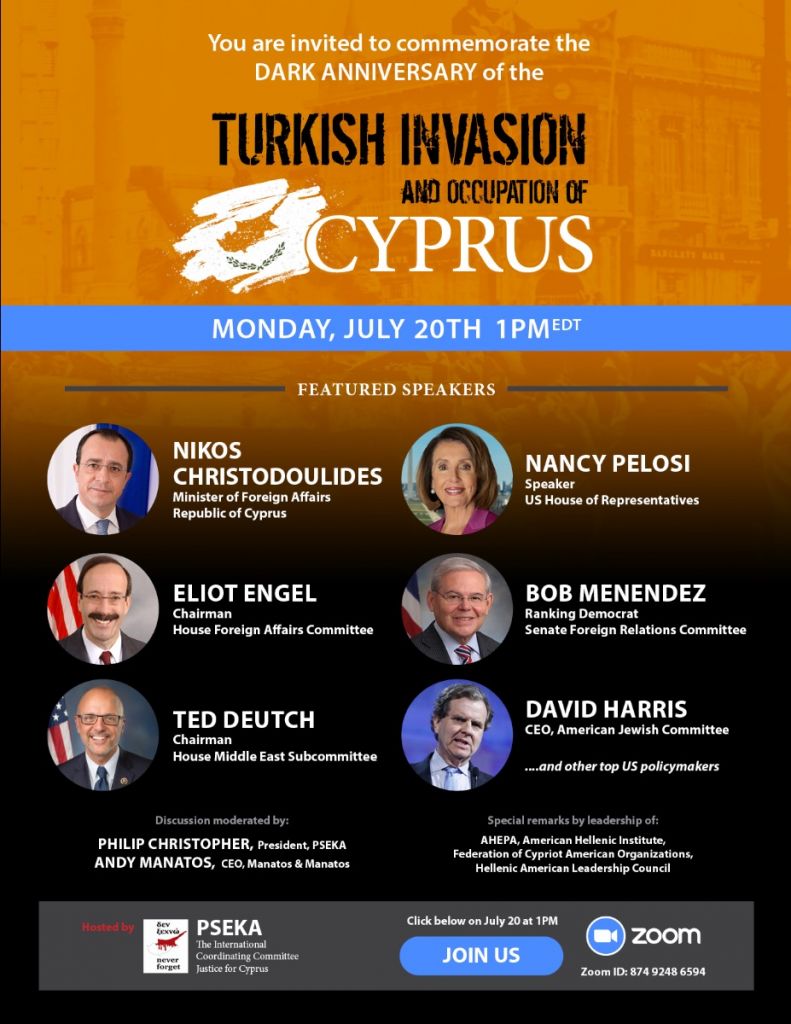 Those policymakers who lead the formulation of US foreign policy toward Cyprus, Turkey and the region who participated in this event included:

In addition, American Jewish Committee CEO and long-time advocate for Cyprus and other Hellenic and Orthodox issues, David Harris, made important remarks during this event. 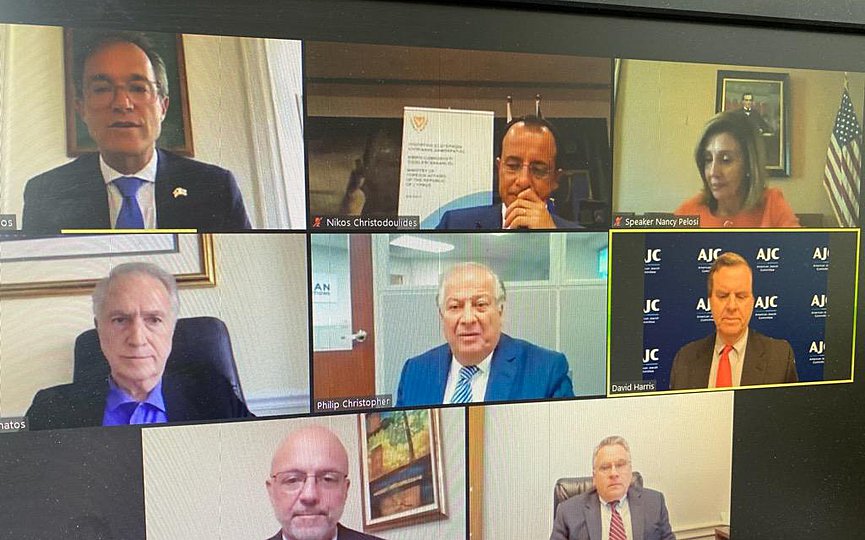 Speaker of the US House of Representatives, Nancy Pelosi

“Turkey…does not [have] license to invade…license to kill, license to violate human rights.”

“Thank you to the Manatos family and to Philip Christopher and to many of you who led the Eastern Mediterranean Security and Energy Partnership Act [becoming] law last December…We’re pleased that…in the FY21 appropriations bill built on the [East Med] Act with the $2 million for Eastern Mediterranean Partnership joint dialogues between the governments of Greece, Cyprus and Israel.”

“And may I just close by referencing Patriarch Bartholomew who is one of the best people who ever existed in the world. He is just so magnificent I hope that health and everything else in terms of coronavirus will enable him to visit the United States sometime soon or that we get to see him.”

“Mr. Foreign Minister I just can’t wait to hear what you have to say. We’re so excited you have made this a very special occasion for us by honoring us with your presence and bestowing your wisdom upon us to keep us current and unified in this cause.”

Minister of Foreign Affairs of the Republic of Cyprus, Nikos Christodoulides

“The consequences [of Turkey’s invasion of Cyprus] are devastating and enduring…46 years after the Turkish invasion, Cyprus is experiencing a new Turkish aggression. This time extending to the EEZ of Cyprus.

“At these very challenging times for the international community due to the coronavirus pandemic, when countries have for the most part come together to fight the common enemy, Turkey has opted to take advantage of the situation further escalating its provocative actions. In what can only be described as a severe escalation of Turkey’s violations of the sovereign rights of Cyprus, Turkey’s sixth illegal drilling operations in less than a year is underway.”

“It is very important to understand that Turkey’s provocations do not take place in a vacuum but rather are aimed to promote Erdogan’s hegemonic ambitions. There can be no doubt that Turkey’s actions in the maritime zone of Cyprus form part of its overall visionistic policy exemplified in Syria, its intervention in Libya, its recent invasion in Iraq as well as its illegal actions in Greece’s maritime zones and air space.”

“In a region that is volatile but one that holds enormous potential and where in recent years Cyprus together with other moderate countries in the region such as Greece, Israel, Egypt, Jordan have worked to forge strong partnerships through cooperation and synergies, Turkey is a dangerous spoil.

It is simply not enough for the international community to verbally reject Turkey’s action. It must act in solidarity and with determination before it’s too late.

“The United States…has a particular important role to play in exerting its influence on Turkey to deescalate. Not only in support of its partners but for the benefit of the whole region and to protect its own interests which are at stake.”

“Cyprus has invested significant political capital in its relation with the United States because we believe in the importance of tangibly enhancing our longstanding partnership to a strategic level…I can confidently say that important progress has been made both at the bilateral and the regional level.”

“In short, the developments of the last few years in the field of security in our very volatile part of the world have shown Cyprus to be a reliable partner in the regional security structures.”

“Turkey’s invasion marked the beginning of an illegal occupation that continues to this day and is the source of instability on the island. Efforts to establish a durable peace have failed time and time again due to Turkey’s interference and intransigence. I continue to firmly believe that if left to their own devices, without external interference from Turkey, the two communities could negotiate a durable peace.”

“I have long championed US engagement on a Cyprus settlement that emphasizes the rights and voices of the island’s citizens and ends Turkey’s occupation…Ending the tragic division of Cyprus will pave the way for peace, stability and prosperity throughout the Eastern Mediterranean.”

“I believe the broader US partnership with Cyprus as well as with its fellow democracies Greece and Israel is critical for the future of security and stability of the Eastern Mediterranean region.”

“From 1974, to its ongoing illegal occupation of Cyprus, to its ongoing violations of Cyprus’s EEZ, Turkey has a lot to answer for. I have pushed the administration to be clear eyed and decisive in responding to Turkish provocations and I will continue to do so until the US truly holds Turkey accountable for its aggression.”

“Whether it’s ending the Turkish occupation, finding closure for the families of the Missing or strengthening our strategic and economic partnerships, I have always made Cyprus a priority of mine.”

“Despite these troubling trends and the continued occupation, there is still a lot of good news. The US and Cyprus are closer than we’ve ever been. From energy cooperation to the deepening security relationship among Greece, Cyprus and Israel to a shared commitment to core democratic values. Yet there is more we can do to deepen the economic and security ties between our two countries and ensure the protection of Cyprus’ sovereignty and territorial integrity.”

“We must maintain our forces on the aggressive posture of Turkey’s strongman and must continue to hold those responsible for violation of sovereignty and of human rights accountable for their crimes and we must not rest until every missing Cypriot, Greek or Turkish, is found.”

“You have my commitment that the Foreign Affairs Committee will continue to stand up to this bullying and erosion of democracy.”

“Beginning nearly 40 years ago, leaders of AJC joined together with Andy Manatos and Phil Christopher and Paul Sarbanes and the late Andy Athens and a number of other distinguished Hellenic American leaders because we were friends here. We didn’t understand why relations among Israel, Greece and Cyprus were not all that they should have been. After all, these were the three anchors of democratic stability in the Eastern Mediterranean. So we went together to work. All of us. We traveled again and again to Athens, to Nicosia, to Jerusalem. And we began to see over time this remarkable strategic triangle develop to the point it is today. And it’s become and anchor of stability and security in the Eastern Mediterranean.

“We have to ask the question: is the international community ready to face the reality that Turkey has chosen now President Erdogan to be an aggressive, assertive player, to ignore UN Security Council resolutions and to go forward believing at the end of the day that he will be able to divide the global community in such a way that he will continue whether in Libya, in Syria, in Iraq, or [with respect] to Cyprus’ EEZ or to Greece’s airspace or go down the list?”

“I would propose that on this day we ask ourselves how many more such anniversaries will need to commemorate…in sadness, in tears before things begin to change?”

“So for us at the American Jewish Committee, this is an issue of principle. Small nations like Cyprus have the same rights to sovereignty, security and stability as large nations do. History has taught us, or should have taught us that the only way to deal with bullies is to confront them, stand up to them. Otherwise they will continue their aggression…I pledge to you that we at the AJC, your friends, will continue to stand by you.”

“I have spoken about this for decades, Erdogan continues to commit serious human rights abuses…We, the government of the US and the US Congress can’t simply dismiss the fact that Turkey has now become a more radical actor seeking hegemony in the region. Very often people say, ‘oh, but they’re a NATO ally.’ Yes, they are. All the more reason why their behavior has to be called into account.”

“Thank you for bringing us together, for reminding us how important it is that we remember the ongoing illegal, immoral occupation of Cyprus and we push for that day when Cyprus is free.”