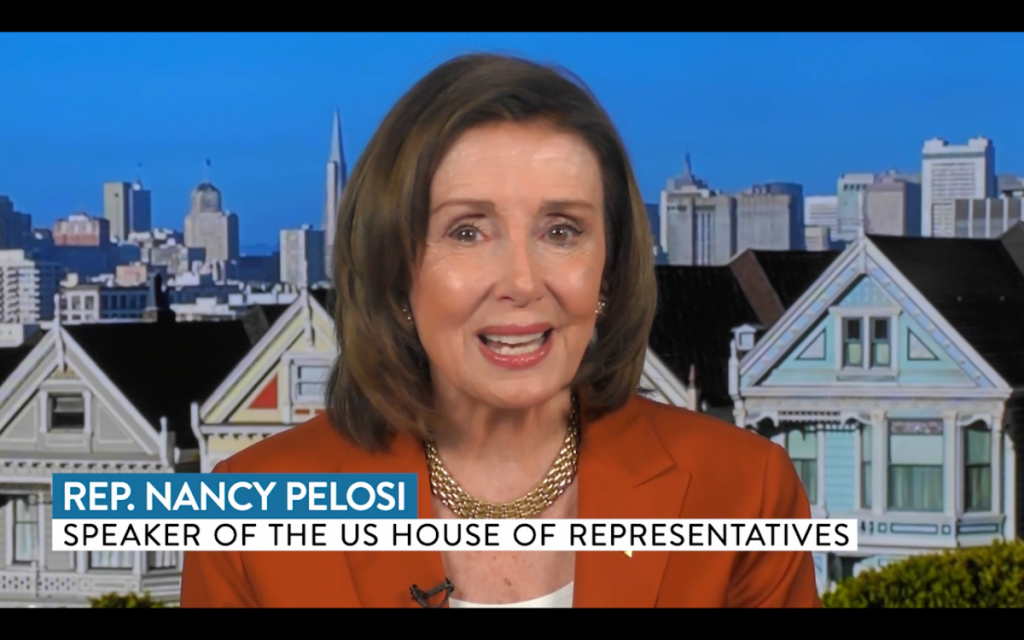 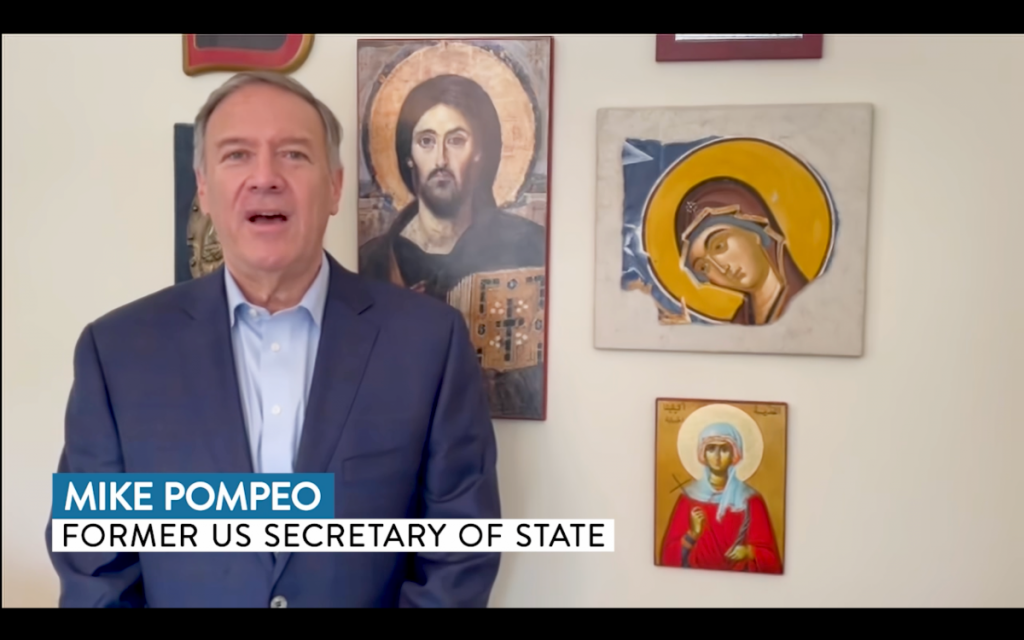 June 13, 2022 – Many of the country’s most respected leaders praised the Manatos family’s generations of service and remarkable “philotimo” on the occasion of the Hellenic Hearts Gala where Mike Manatos was presented with the first Philotimo Award.

In all, 49 prominent individuals from US government, industry, media, human rights and leadership of the Greek-American community sent video remarks that were played at the June 13, 2022 event in suburbs of Philadelphia, PA. 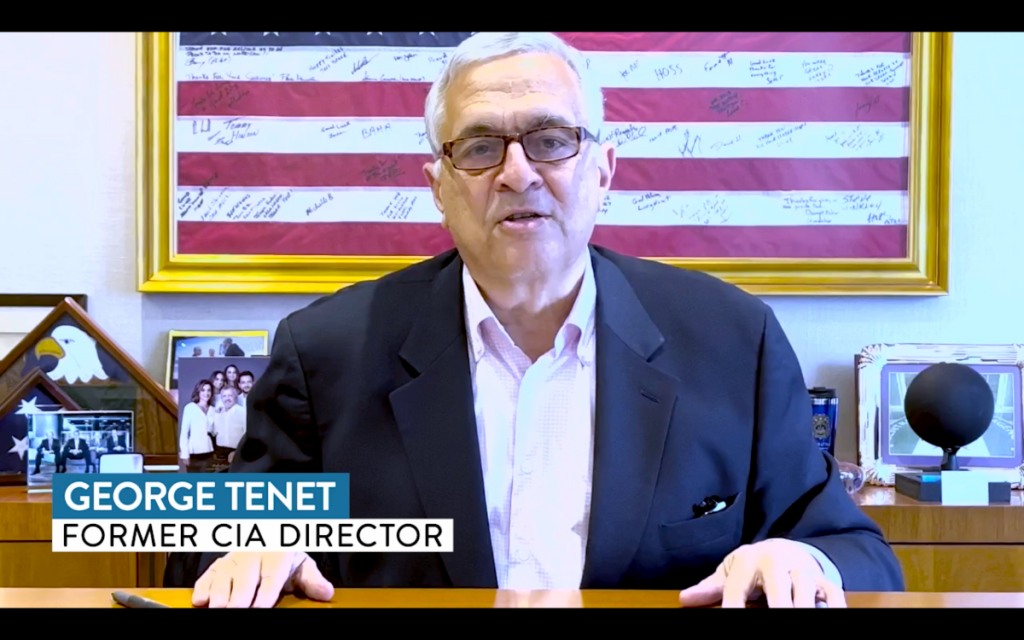 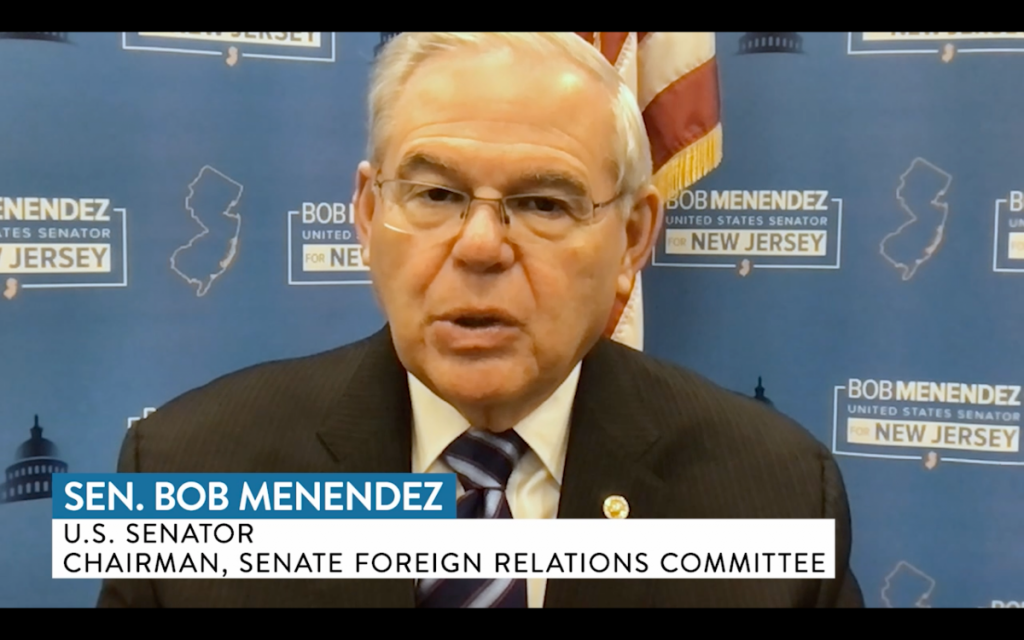 Excerpts from remarks by those who have worked closely with the Manatos family over their 86 years and 3 generations of service to the country and community follow:
Speaker of the House Nancy Pelosi

“Congress and the country are grateful to Mike for following in the footsteps of his father and grandfather in making a difference in the lives of so many. I’ve always said that the Manatos Family is an all-American family. What a fitting tribute to Mike’s love of honor and his devotion to righteous causes greater than himself.”

Former acting Secretary of State and US Ambassador Daniel Smith
“His devotion to his family, his friends, his community, his church and his country is manifest in everything that he does. It is only when you meet his family that you recognize the source of his drive and his commitment to the ideals captured in the word philotimo. You also realize that Mike’s good works will go on whether anyone recognize them or not. That, to me, is the essence of philotimo.”

Former Secretary of State Mike Pompeo
“When I traveled the world as America’s secretary of state, I saw firsthand how one person can make an enormous difference in the lives of people all across the world. Congratulations to you, Mike. You truly do deserve this great honor. Axios.”

Former Deputy Secretary of State & Director of National Intelligence Ambassador John Negroponte
“Mike Manatos, like his father and grandfather before him, has established an extraordinary record of involvement in public affairs in Washington. He is a great philanthropist. He is an outstanding lobbyist. But above all, he is a friend to any Greek American who is in need of help.”

Former NATO Supreme Allied Commander Admiral James Stavridis
“I’ve watched the incredible integrity of the family and Michael is someone who personifies the very best of our Greek culture.  The entire Manatos family in all of its generations, personify philotimo.”

Commanding General, US Army Forces Command, General Andrew Poppas
“The spirit of doing what is honorable, even at cost to yourself. It’s to live not just for yourself but for something greater than yourself. And that’s exactly what Mike Manatos has done his entire life.” 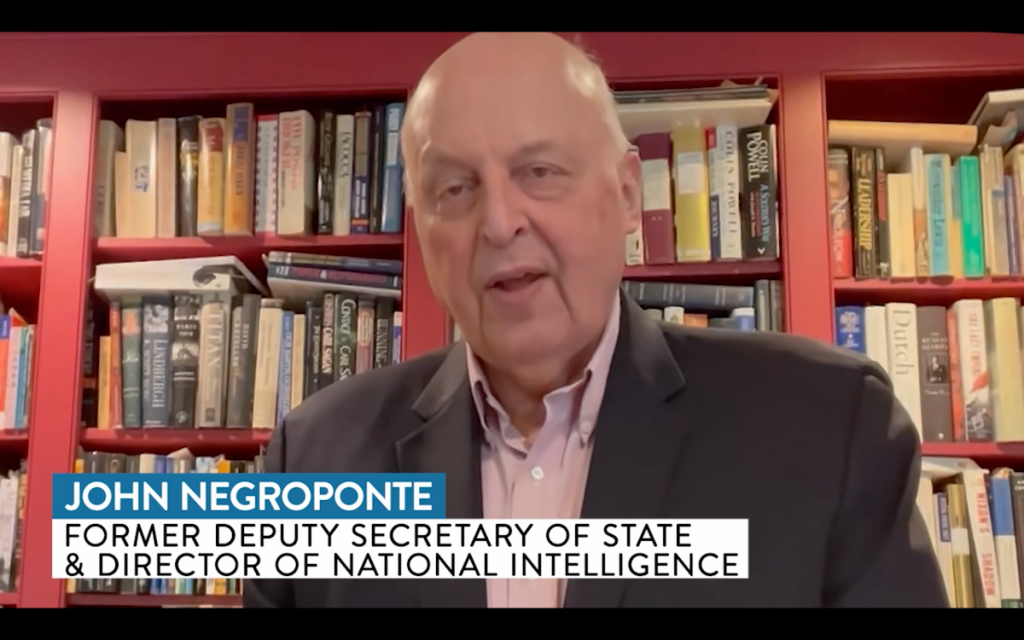 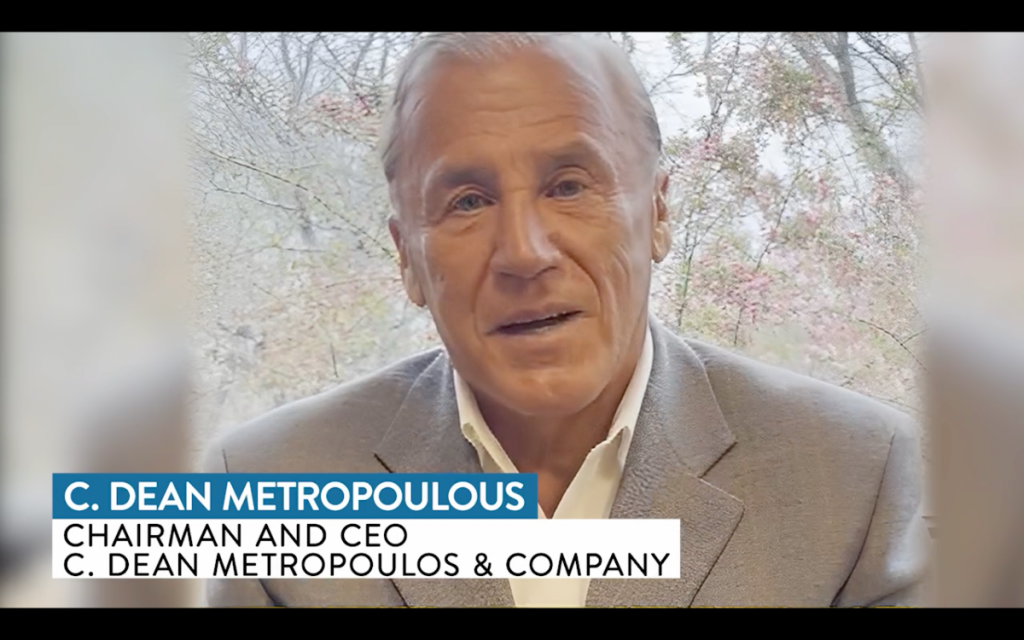 Former Prime Minister of Greece George Papandreou
“His integrity, generosity, empathy, and his genuine commitment to doing good and giving back have always been a source of inspiration and pride not only for us Greeks, but for all those who had the luck to meet and work with him.”

Greek Orthodox Archbishop of America, His Eminence Archbishop Elpidophoros
“Mike, and indeed the entire Manatos family, have a long story of exercising this most Greek of virtues throughout the omogenia:  philotimo. He is a most worthy recipient of this first annual award.”

Protopresbyter of the Ecumenical Throne, Father Alexander Karloutsos
“You have carried on that great tradition of the Manatos family.  There are many people that talk about things, but you have been the man in the arena. You are a doer of deeds.  And philotimo is not just simply a word in your life. It is a way of living your life. Mike, Laura and children, you have become a family of philotimo. And you have spread that message throughout the world.”

Chairman, Senate Foreign Relations Committee, Senator Bob Menendez
“Mike is someone who embodies so many of the qualities of the Greek word philotimo. I’m incredibly grateful for the work we have done together and I’m happy to call him a dear friend.”

US Senator Chris Van Hollen
“He’s carrying forward a tradition of excellence and service that has guided the Manatos family for generations. Courage, honor, duty, integrity and service. Mike embodies each of these qualities. He’s dedicated his life to serving others above himself.  Mike, you represent the very best of us, and you make us all proud.”

Congressman John Sarbanes
“He has an expansive desire and capacity to lift up other people. He’s made such a difference in so many ways throughout his life and career.”

Congressman Chris Pappas
“You’ve touched countless lives and made our country a better place because of it. Thank you for all that you do to serve our nation.”

Congresswoman Dina Titus
“You truly epitomize the qualities of philotimo. Your selfless public service, your dedication to the church and your mentoring of young Greek Americans.”

Congressman Gus Bilirakis
“We appreciate all he’s done for Greece and Cyprus, but more importantly for his community and the entire United States.”

Congresswoman Nicole Malliotakis
“Mike, thank you so much for the work that you do to advance the causes of the Hellenic community.”

Former Congressman Joe Kennedy
“When I think of who you are and what you represent its integrity, its honesty, its credibility, its kindness.” 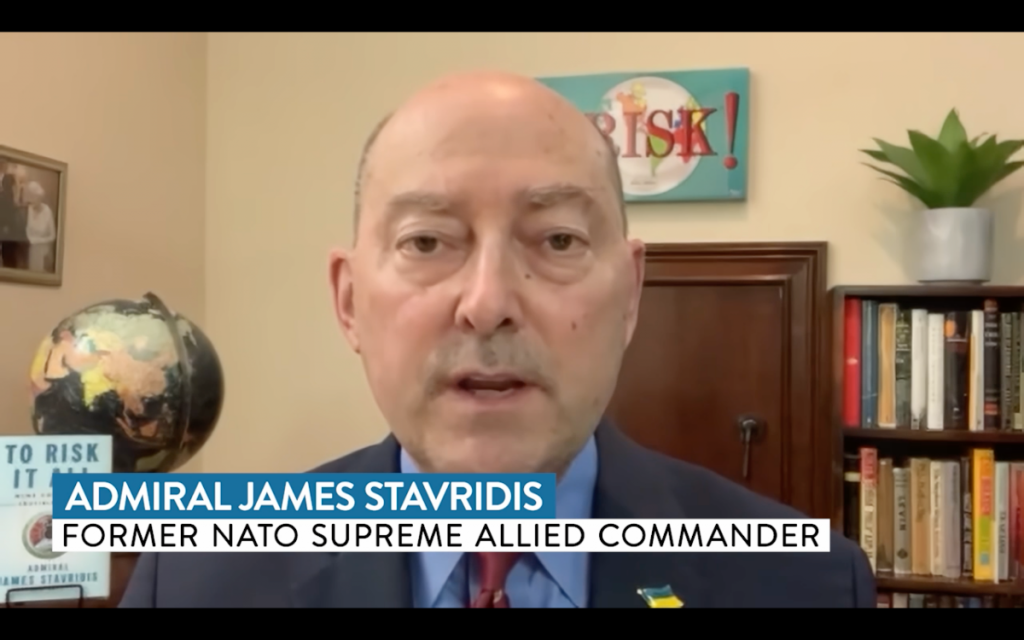 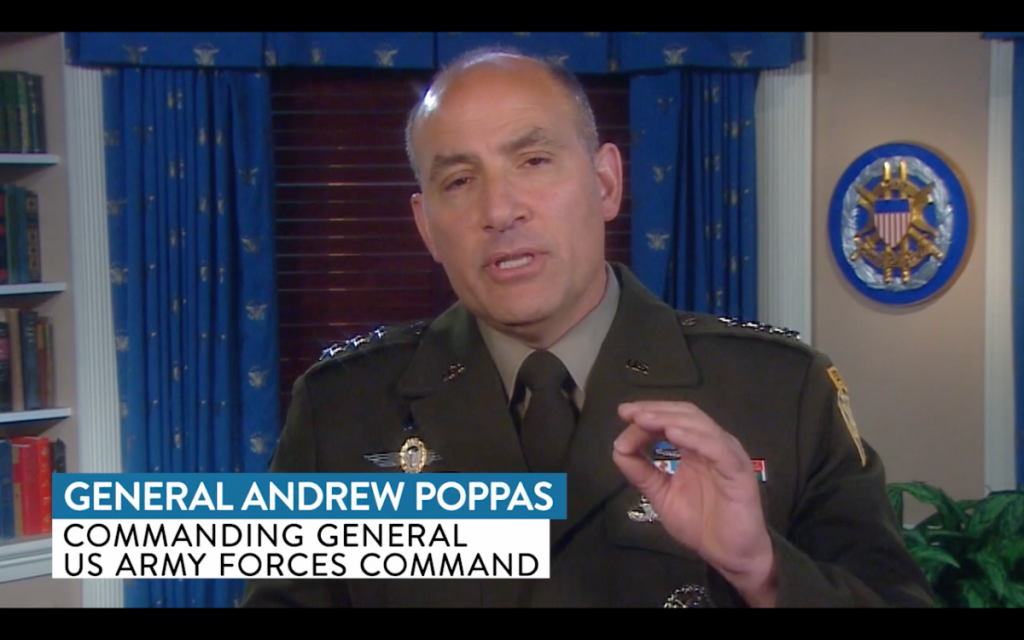 European Union Ambassador to the US Stavros Lambrinidis
“Expanding the family’s legacy of giving back to the community. Philotimo is placed at the core of who you are, as a compass that guides your action.”

US Ambassador to Greece George Tsunis
“He is one of the most decent, caring people I have ever met in my life. A bundle of energy constantly in good works.”

Former Governor of Massachusetts Michael Dukakis
“Philotimo is a very special word in Greek and it really represents in so many ways the service that you and your family have given to the community.”

Lieutenant Governor of California, Ambassador Eleni Tsakopoulos Kounalakis
“Mike, your life’s work has been advancing the values of philotimo, the pursuit of honor through your deep commitment to serving your community.  Thank you for your service, Mike. You truly make the world a better, kinder, safer place.”

Former Mayor of San Francisco Art Agnos
“It starts with Mike’s grandfather, Mike Manatos, and continued with Andy Manatos, Mike’s father, and now we see Mike following in their footsteps, serving all of America, as well as our home country of Greece.”

Former White House Chief of Staff John Podesta
“You’ve just been a hero to so many people across the globe. You’ve lived a life of honor. As Saint Paul noted, you’ve labored to bring honor and empathy and humility to all the work that you’ve done.” 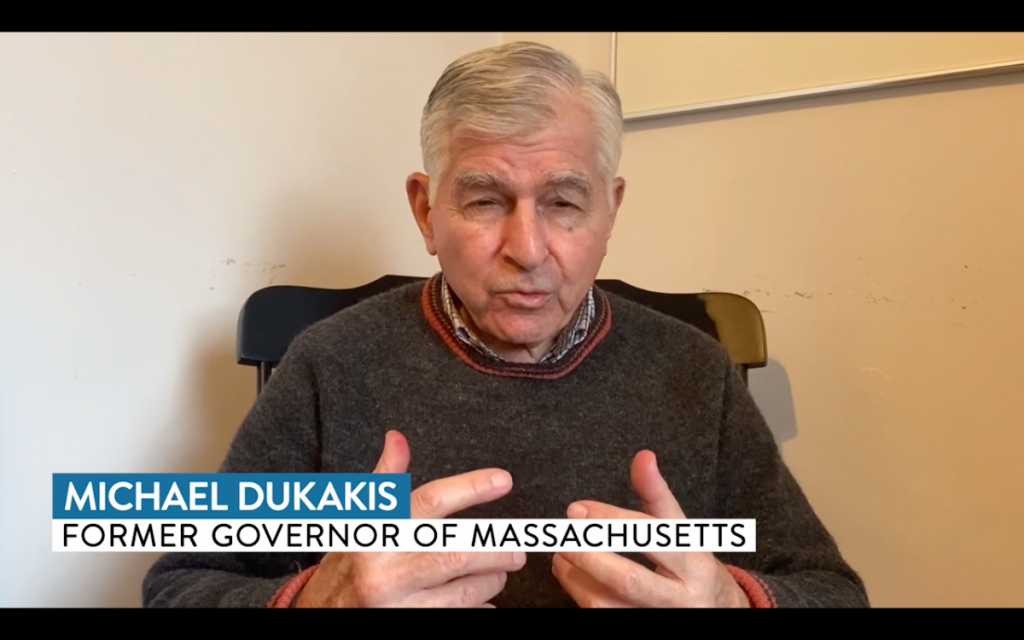 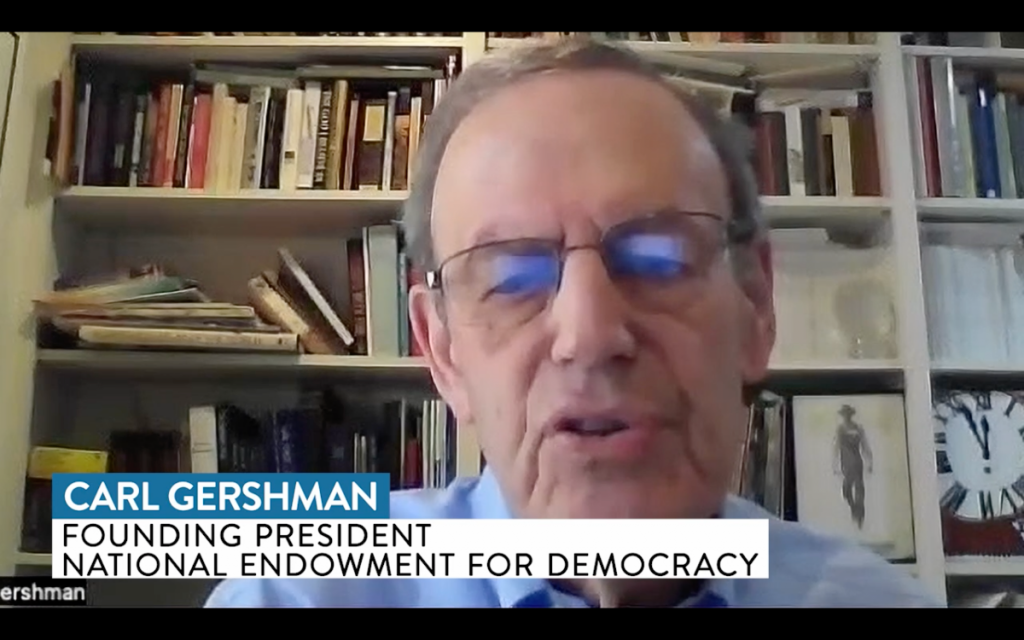 National Endowment for Democracy Founding President Carl Gershman
“He treats people with kindness and respect, he exemplifies the virtues of decency, integrity, and honesty in all of his actions.  Never in our country’s history have the attributes of philotimo that you exemplify so well been needed more.”

Mother of Oxi Courage Award recipient James Foley, Diane Foley
“He’s a man of moral courage He is truly a force for good.”

Make-A-Wish Mid-Atlantic President & CEO Lesli Creedon
“For 25 years a result of all you’ve done. You’ve raised over $1.5 million and granted the wishes of thousands of children with critical illnesses. We are so grateful for your support, your leadership, your dedication, your passion.”

American University President & Former HHS Secretary Sylvia Mathews Burwell
“In your incredible policy work it’s not just about all the success you have. It’s much more about the fact that every step you take and whatever you do, you are guided by the principles of what’s right and integrity and service.”

University of Virginia Miller Center of Public Affairs CEO, Bill Antholis
“Smart, selfless, high integrity. Mike is a citizen and a patriot. Most importantly, he cares about his fellow citizens, what they care about, what they dream about, what they want to contribute.”

Michael Psaros, Co-Founder, KPS Capital Partners
“Mike’s service to the Holy Orthodox Church, is extraordinary. But what matters to me is Mike’s value and value system, which reflects that of his entire family.  He’s an exemplary husband, father, brother, and son.”

George Logothetis, Chairman & CEO, Libra Group
“The lens through which he sees life is a lens tinged with philotimo.  To be decent, to be correct, to have faith, to be honest, to give more than you take, to help those in need without asking anything from them. When I say these things, they are Mike!”

Nick Logothetis, Co-Founder & Board Chair, Concordia
“For everything you do for the Greek community in Washington, DC and around the world. I could not think of a better recipient for this award.”

Chairman, National Hellenic Museum, John Calamos
“Thank you for your tireless efforts and countless contribution to the Hellenic community. You are a true example of what this award represents.”

Chairman, Leadership 100, Jim Logothetis
“You have been such a great role model for all of us across the country, but especially for our young people. We really appreciate everything you do.”

National Commander, Archons of the Ecumenical Patriarchate, Anthony Limberakis
“Mike, the Manatos family, are patriots and are defenders of the faith.”

Chairman, National Hellenic Society, Drake Behrakis
“A leader in our community, not only to your peers, but also more importantly to young professionals that look up to you.” 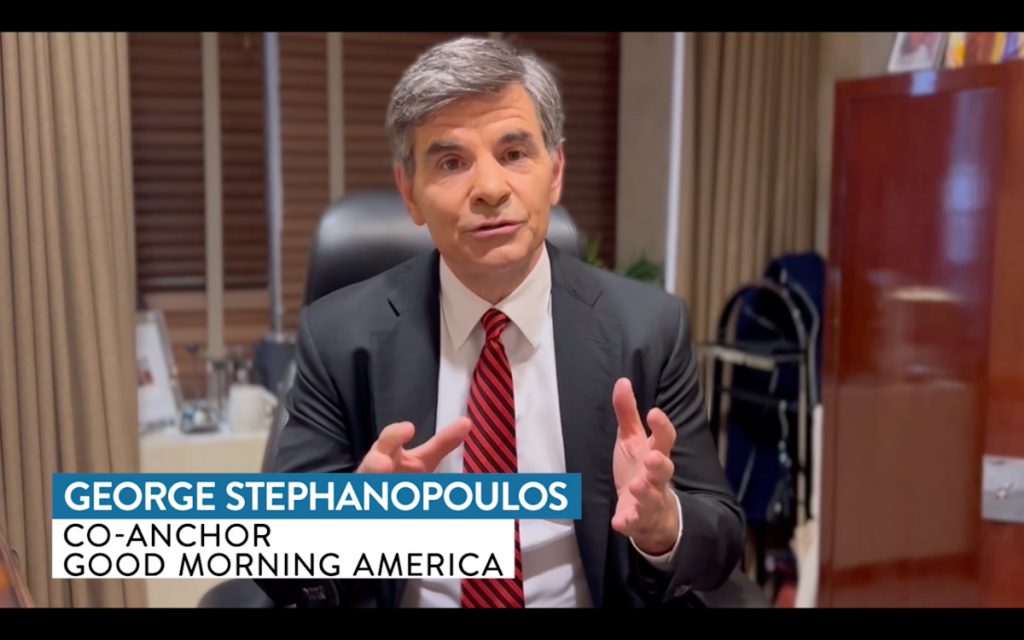 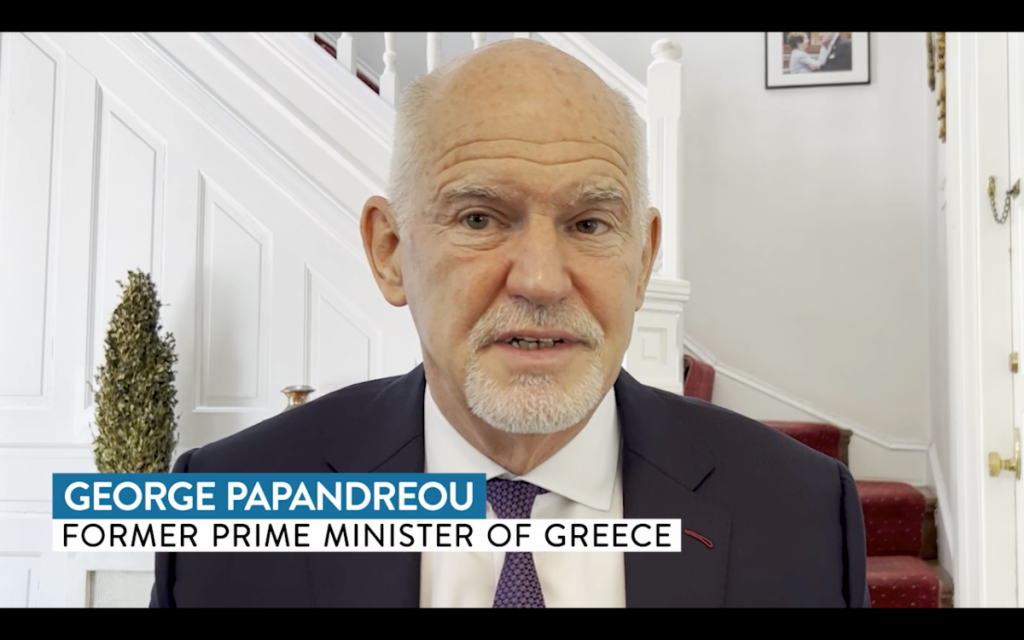 Good Morning America Co-Anchor, George Stephanopoulos
“Mike has lived out the values embedded in philotimo through his service to his church, to family and the country. He’s an inspiring leader who’s given so much back.”

Fox News Channel Chief Washington Correspondent, Mike Emanuel
“He’s been a key player on the Archdiocesan Council, Leadership 100 board of trustees and on the board of Project Mexico.”

NowThis President, Athan Stephanopoulos
“Integrity, honor, courage and sacrifice. And these are just some of the words that come to mind when I think of Mike.”

Danialle Karmanos, Philanthropist, activist, and social entrepreneur
“You work harder than almost anyone I know. We have so much admiration for you, your vision, your determination, your fierce perseverance to make the world a better place.”

Pete Karmanos, Chairman, Maddog Professional Services
“I admire the things that you’ve been able to accomplish and the wonderful work that you do.”

John Koudounis, CEO, Calamos Investments
“His love of family and country are only shadowed by his integrity, compassion, generosity, empathy, loyalty, humility and pride.”

Kelly Vlahakis-Hanks, President & CEO, ECOS
“You’ve spent your entire life lifting up others and working behind the scenes to champion change.”

The National Herald, Co-Editor and Publisher, Eraklis Diamataris
“He is a man with a profound sense of duty, coupled with integrity, loyalty and humility.”