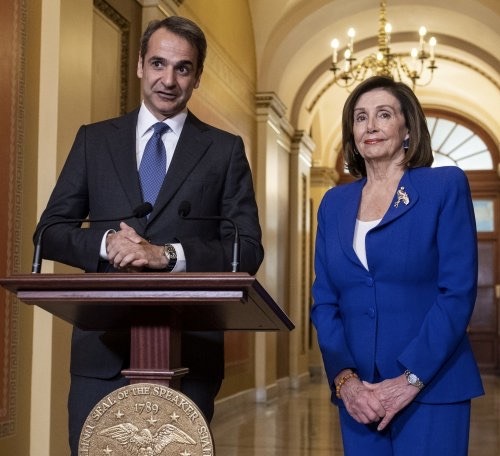 WASHINGTON, DC, April 28, 2022 — Never before in US history has a Prime Minister of Greece addressed a Joint Meeting of the US Congress. Such an historic address will take place by Prime Minister Kyriakos Mitsotakis on May 17. In addition, Mitsotakis will join only 8 other world leaders who have addressed a Joint Meeting of Congress since 2015.  They include: Pope Francis, the Prime Ministers of India, Japan and Israel, and the Presidents of Afghanistan, France and Ukraine and the NATO Secretary General.

Today Speaker of the House Nancy Pelosi, along with the bi-partisan leadership of both the US Senate and House of Representatives, including House Republican Leader Kevin McCarthy, Senate Majority Leader Chuck Schumer and Senate Republican Leader Mitch McConnell, invited Prime Minister Mitsotakis to address US Senators and Members of Congress on the floor of the US House of Representatives on Tuesday, May 17, 2022 at 11:00 am ET.  This historic address will take place on the occasion of the celebration of Greece’s bicentennial and the return of democracy to its birthplace.

Speaker Pelosi said to Prime Minster Mitsotakis in this invitation, “As our world faces a pivotal moment in the fight between the forces of democracy and autocracy, the transatlantic alliance remains vital to the future of freedom in the world.  The Congress and our Country look forward to hearing your message of democratic values as we continue to strengthen our partnership, bolster security and freedom worldwide, and build a brighter future for our children.”

The full text of Speaker Pelosi’s letter can be found here. The day before Prime Minister Mitsotakis will be meeting with the President of the United States Joe Biden at the White House.